Do You Know the Canadian Air Barrier Standards CAN/ULC-S741 and S742? During the 1970s, extensive research was carried out in Canada on air leakage in buildings. Researchers at the National Research Council of Canada (NRCC) demonstrated the importance of managing air leakage through building enclosures. In the following decade, the concept of air barrier materials emerged. It was formally introduced in the 1985 edition of the National Building Code of Canada (NBCC).

It was then accepted that uncontrolled air leakage increases the burden on heating or air conditioning and causes problems because air can transport large amounts of humidity. Building professionals adapted their designs to this new reality; choice and positioning of materials in assemblies brought new challenges, and the functions of air barriers and vapour barriers were often misunderstood. Consequently, major failures, such as mould growth in wall assemblies, rotting of structural materials, or bursting of water-saturated exterior cladding materials in winter were observed.

Starting in the mid-1990s, the NBCC prescribed a maximal air leakage rate for exterior wall assemblies, but did not indicate how to evaluate materials and systems to determine compliance. Interestingly, standards for air barriers were first introduced by ASTM with the development of E2178 standard, entitled “Standard Test Method for Air Permeance of Building Materials,” which was published in 2001. This standard test method rapidly became the reference for determining the air leakage of building materials.

In Canada, the first standards related to air barrier materials and systems appeared several years later. CAN/ULC-S741 and CAN/ULC-S742 were respectively published in 2008 and 2011. Some may say these are just Canadian versions of the ASTM E2178 and E2357 standards because they reference their American counterparts for test conditions. But that is all they have in common.

First, the ASTM E2178 and E2357 standards are test methods. They describe in detail the procedures to be followed to measure the air leakage rate of air barrier materials and assemblies. Being test methods, these standards do not establish a requirement or performance level. It is therefore impossible for a material to meet or exceed the requirements of these standards. Testing an air barrier material as per ASTM E2178 or an air barrier assembly as per ASTM E2357 provides a numerical result corresponding to the air leakage rate or permeance of the material or assembly. This result may then be used to compare various materials or assemblies or to demonstrate compliance with building code requirements.

The Canadian standards CAN/ULC-S741 and S742 are specifications. Not only do they indicate how to measure the air leakage of air barrier materials and assemblies (by referencing the ASTM test methods above), but they also include performance requirements. S741 and S742 therefore help designers and specifiers to easily recognize the level of performance provided by air barrier materials and assemblies tested under S741 and S742. The S741 standard requires that the result obtained from the air leakage testing be clearly mentioned when reporting testing results in order to facilitate comparison between materials. It is not sufficient to simply indicate “pass” on the data sheet of an air barrier material tested according to S741. For air barrier assemblies, a five-level classification (A1 to A5) is included in S742 and is based on the maximum air leakage rate measured during the test.

Presently, the assortment of air barrier materials available is quite extensive. From products sold in sheet form (self-adhered or nailable) to liquid products intended to be sprayed or troweled; all can be found on the market. They can be manufactured from organic fibres or synthetic plastics and be pre-assembled or site-constructed. Some rigid insulation boards can also claim to be air barrier materials. The CAN/ULC-S741 standard is entitled “Standard for Air Barrier Materials—Specification” and allows testing of all these different materials to determine their performance against air leakage. This standard is intended for materials themselves without accessories and details, irrespective of their composition. It establishes proper testing methods for air leakage and air permeance based on ASTM E2178 and requires that the air barrier materials being tested exhibit air leakage rates no greater than 0.02 L/s•m². Materials must meet this requirement in both directions (infiltration and exfiltration), and the test is performed before and after a conditioning and aging period during which the material is exposed to UV radiation then subjected to heat conditioning. In order to meet the requirements of S741, the air leakage rate of the air barrier material after conditioning must not be more than 10% or 0.001 L/s•m² greater than its air leakage before conditioning. This ensures that the air barrier material will maintain its integrity for a minimal period after its installation before being covered by the exterior cladding.

CAN/ULC-S742 is entitled “Standard for Air Barrier Assemblies—Specification” and covers the air barrier assemblies (a combination of air barrier materials and their accessories) used in low-rise and high-rise buildings. Similarly to S741, it includes test conditions to measure the air leakage rate of an air barrier assembly’s representative specimen and defines the performance level that must be attained. Each tested assembly is then given a classification (A1 to A5) that is based on its air leakage rate at a reference pressure difference, measured before and after exposure to cyclic wind loading.

The testing detailed in S742 references the testing methods and procedures found in ASTM E2357. The air barrier assembly being tested is mounted in two different 2.4 m by 2.4 m frames. The test specimens must be representative of the air barrier assemblies as constructed in the field and according to the manufacturer’s installation instructions. This includes the use of primer when applicable, the proper sealing of laps, and perimeter reinforcement if required.

In the first frame, the assembly is installed without any penetration of the air barrier materials. Side and end laps must be present in the case of discontinuous air barrier materials (sheet-applied materials or panels). In the second frame, various penetrations typically found in an exterior wall are added to the assembly: window, galvanized steel duct, pipe, junction boxes, and brick ties, for example. All penetrations must be sealed with appropriate accessory material to maintain continuity of the plane of air tightness. Figure 1 shows a frame with all penetrations sealed and ready to be tested.

This is where S742 and ASTM E2357 part ways. After being subjected to this first test, each frame is exposed to a series of pressure differences (infiltration and exfiltration) simulating cyclic wind loads. Static pressures starting at 450 Pa are maintained for one hour. Next, cyclic pressure loads and gust loads reaching at least 980 Pa are applied to each frame. Deflection of the air barrier assembly is measured during this portion of the test, which provides professionals with guidance on the selection of materials.

Air leakage rate measurement is then repeated twice on each frame. The first measurement is performed under typical laboratory conditions (identical to the test prior to cyclic loading). The second measurement is performed under “winter” conditions, where a temperature difference is induced across the frame. In this case, the exterior side of the assembly is cooled to -20 °C while the interior side is maintained at 20 °C. For an air barrier assembly to obtain the A1 classification (the most stringent classification), the largest air leakage rate measured in all the above conditions cannot exceed 0.05 L/s•m² at a pressure difference of 75 Pa.

Before S742, designers and specifiers could not rely on a test method to evaluate the air barrier performance of roof assemblies. A significant advantage of S742 is that for roof air barrier assemblies, if the designated plane of air tightness is a low-sloped membrane roof assembly, and the roof membrane serves as the air barrier material, the assembly is deemed to have an A4 classification (maximum air leakage rate of 0.2 L/s•m²) without having to be tested.

In order to demonstrate a better classification than A4, roof air barrier assemblies for which the CSA A123.21 standard is applicable will be allowed to be tested using the parameters and procedures found in CSA A123.21. Therefore, testing will be performed horizontally (as the roof is installed normally) instead of attempting to position these assemblies vertically as required by the ASTM E2357 test procedure.

Canadian standards were enriched with the publication of CAN/ULC-S741 and S742. Both these standards provide designers and specifiers with greater confidence in the expected performance of air barrier materials and assemblies used in Canada. Requirements found in these standards match those of NBCC, which has integrated a reference to CAN/ULC-S742 in its 2015 edition (Division B, part 9). The usefulness of S741 and S742 will most likely increase their presence in specifications as more professionals discover their advantages. 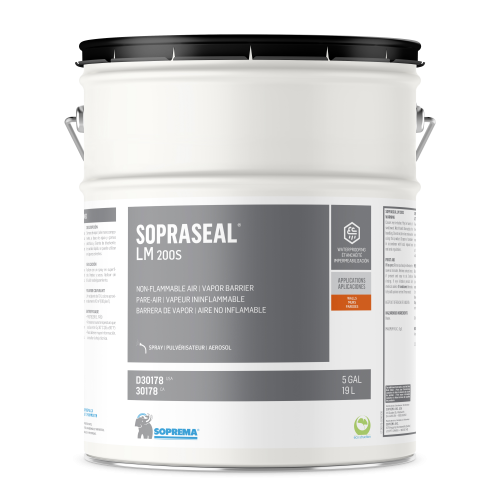